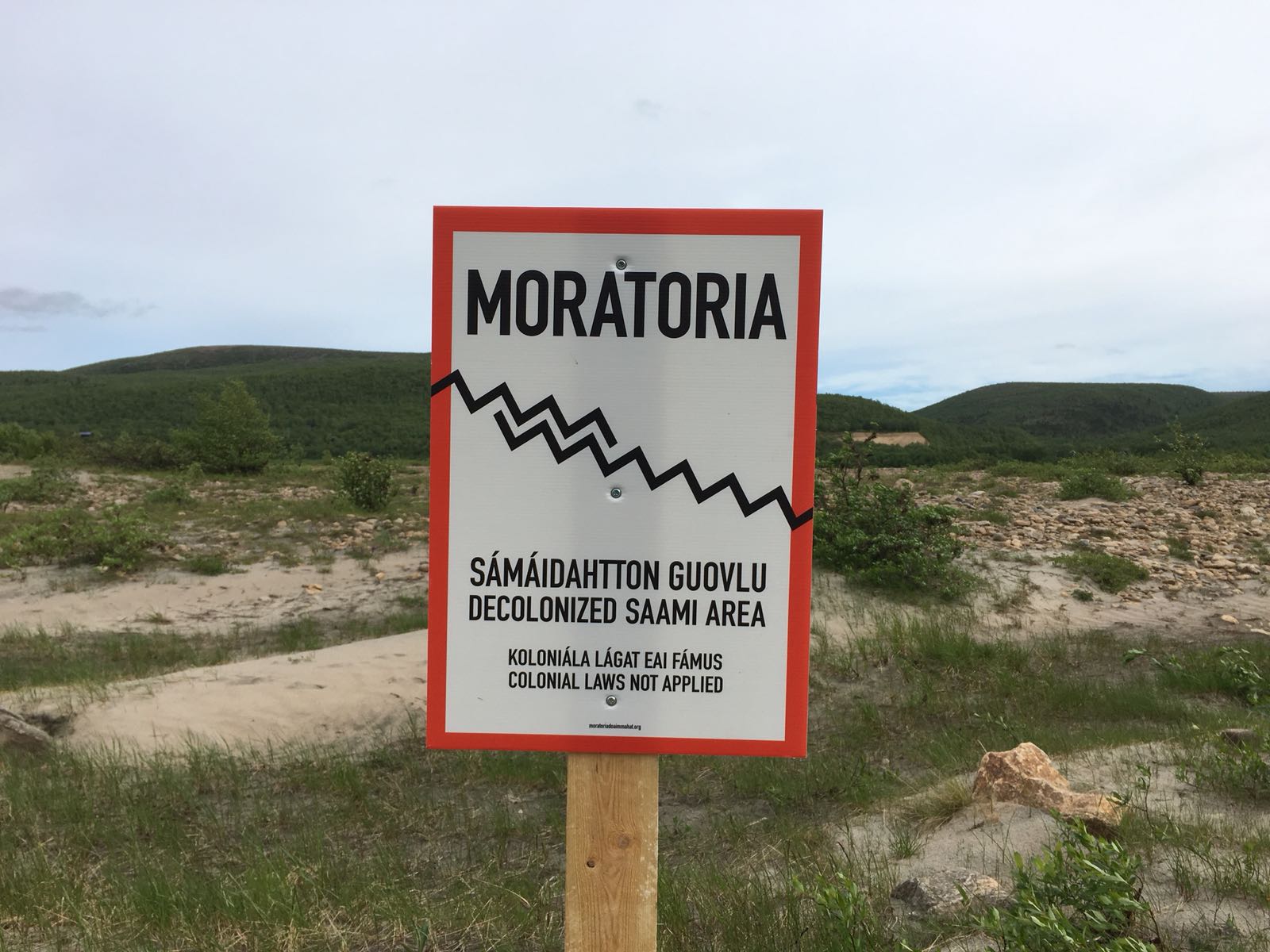 The Moratorium Office is a project by Outi Pieski, Jenni Laiti, an artist and activist, and Niillas Holmberg, a poet and a musician. The project was started on Tiirasaari, an island in the Deatnu River in Utsjoki. Moratorium means postponement of a law or a temporary delay in its enforcement. In summer 2017, the Ellos Deatnu! (Long live Deatnu!) group declared a moratorium around Tiirasaari to oppose a new fishing agreement concerning the Deatnu River, which in the opinion of the local Sámi people restricts their fishing and increases pressure from recreational fishing on salmon stocks. The Moratorium Office is a combination of art and activism (artivism) and offers everyone tools and information for declaring their own decolonialist moratoriums. Decolonisation means deconstruction of a foreign power and the return of power to the inhabitants of the colonised area. The project’s goal is to empower and activate people to take action to promote common goals. The documentary material displayed in the installation presents the various moratoriums that have been declared. 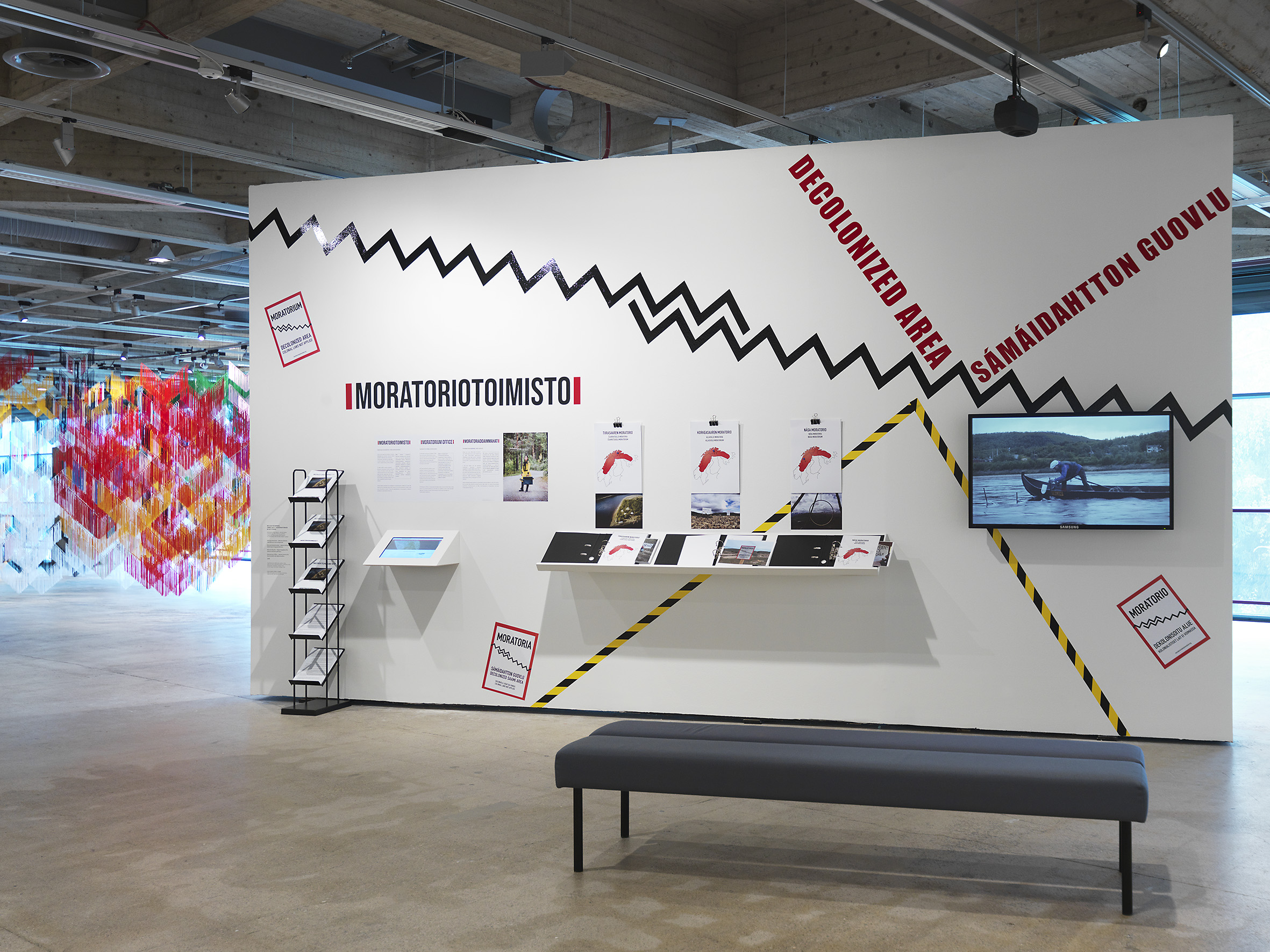 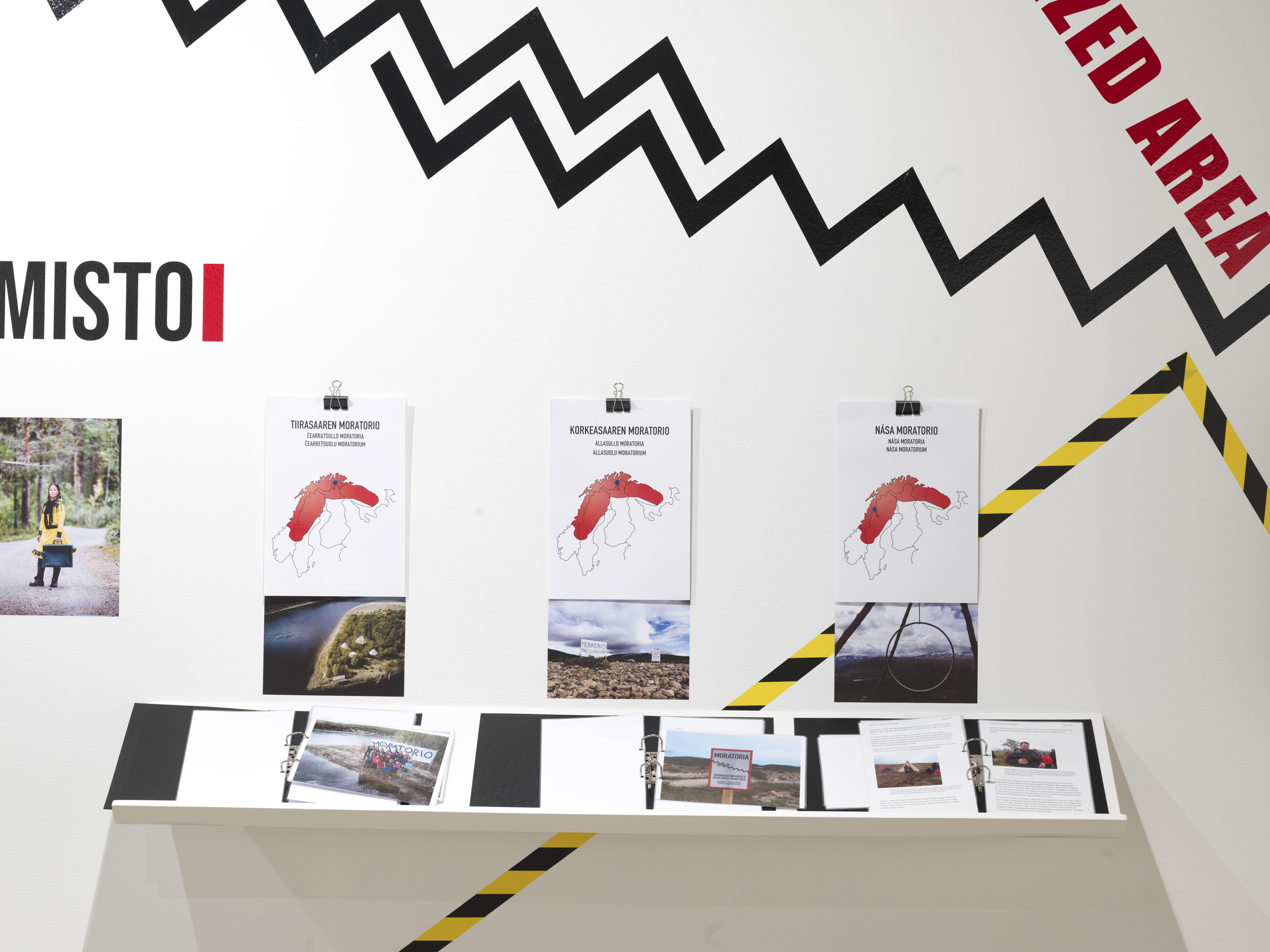 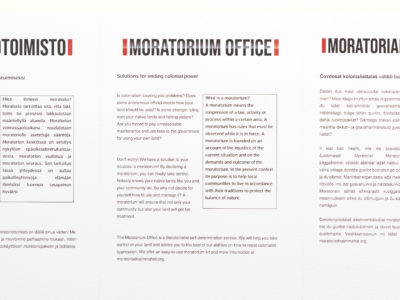 Time Out, Moratorium In!

They are using time against us. The Nordic Governments – who claim ownership over the divided areas of Sápmi – are playing a trick of endless process and bureaucracyon us, the natives of Sápmi. How long are we supposed to scribble statements in committee meetings, which seem to exist in Kafkaesque nightmares? It would be inaccurate to say they are wasting our time because, ultimately, it’s them making uswaste our time. We are wasting our time on a game that is theirs.

In response, a group of no-time-to-lose artists and a bunch of enough-is-enough activists came up with a time-out gesture: a moratorium.

A Moratorium is declared in the area of Čearretsuolu Island regarding the new fishing regulations for the Deatnu (Tana/Teno) River, as the new regulations threaten the wellbeing of the Sámi from the Deatnu Valley. Salmon fishing plays an indispensable part in the Sámi way of life. The new regulations represent a clear violation of human and Indigenous rights as well as of the constitutions of Norway and Finland, which were negotiated with negligible consultation of the local Sámi community.

A moratorium means that something is halted – for example, a law, action, or process.In this case, itmeans that the implementation of the new fishing regulations is halted in the area surrounding Čearretsuolu, whichis Sámi territory.

That’s right, halted. Why play a foreign game of chess on water? Our pawns keep sinking whilst theirs come charging on pontoons. Why play anything on homeland with alien rules?

On this specified moratorium area, Finnish and Norwegian laws are no longer valid and Sámi concepts of justice and customary law have beenapplied.What are they going to do? Drag us away and lock us up? Fine us?

They haven’t. A year has passed and they haven’t even come and asked for a license to fish — the very idea that originally repulsed us and started this whole thing.

The support we got on local, national, and international levels has been nothing short of moving. A movement is often triggered by the experience of being touched and moved. We started getting messages from people expressing needs for moratoria of their own, in their home regions. Most of them seemed eager, and inspired to test this new way of securing their wellbeing. However, nearly all of them were concerned with the amount of effort it takes to establish a moratorium. So, how can we make the process as simple as possible?

Imagine if there was an advisory service you could approach with all kind of questions regarding any stages of setting up a moratorium. Imagine is there was an office which provides you with a moratorium kit containing guidance on how to proceed from A to Z; guidance for implementing a moratorium, clear instructions and templates for a moratorium declaration, press release etc. Well, behold The Moratorium Office.

We are living in a time in which Indigenous sovereignty on Indigenous lands is not only something that determines their futures as nations. In awareness of climate change, Indigenous self-determination is widely considered a global necessity. Yet in spite of environmental circumstances it seems unlikely that Indigenous nations will be granted sovereignty out of sheer good will, or even concern over our planet.

It’s deadly dangerous to ask someone morally unauthorized for a permission to exist. It’s on us to stop asking for the unobtainable and be proactive.